Egg rolls… Everybody’s favorite… Easy to eat… can eat blank, eat by dipping in sweet  ‘n sour sauce, eat with vermicelli noodles, eat by rolling inside green leaves like sweet choy or mustard greens baby lettuce leaves,…  Just couple dollars, we can get them everywhere in Asian restaurants but how about get the ones suiting our tastes.  It’s seem uneasily.  Here is an idea how we can prepare ones for ourselves.  Go and try… if it doesn’t succeed first time, we can try others.

Here is my final dish of fried egg rolls.  How is that? Look yummy, right? 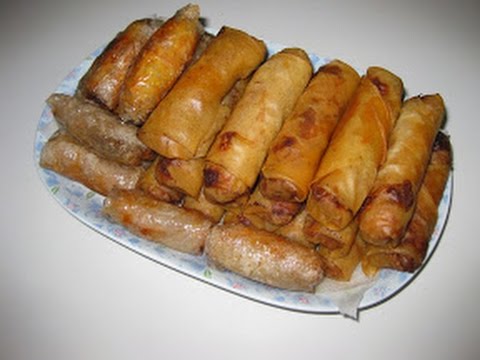 How spring rolls can be done?

Egg yolk is used sealing the roll after rolling

Video on how to make eggrolls at home.

It’s not so bad when tasting but does this way is the right way?  I don’t know but there is one thing I known for sure that I can eat them without throwing up or abdominal pain lately.

2 Comments on "How to Make Golden Yellow Spring Rolls"

How To Make Vietnamese Carrot and Radish Pickles